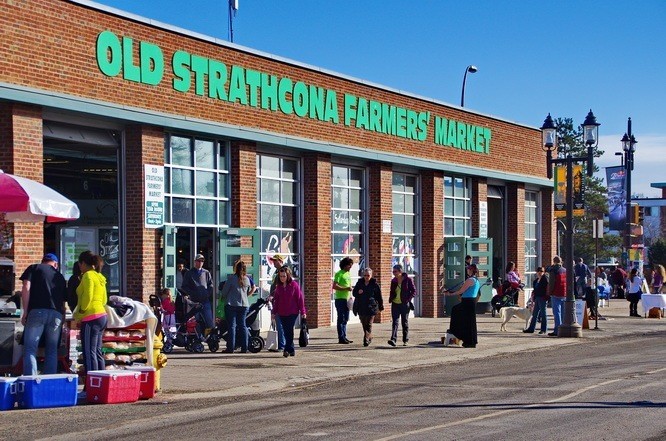 According to the neighbourhood description in the City of Edmonton Map utility,

Strathcona was named for Lord Strathcona, Hudson's Bay Company Governor (1889–1914) and the man chosen to drive the "last spike" of the CPR transcontinental railway. The neighbourhood became part of Edmonton when the City of Strathcona amalgamated with Edmonton in 1912. Residents enjoy proximity to Old Strathcona, the University of Alberta, and outdoor recreation in the river valley.

The neighbourhood of Strathcona is bounded on the south by Whyte Avenue, on the north by Saskatchewan Drive, on the west by 107 Street, and on the east by Mill Creek Ravine. Its central location provides good access to downtown Edmonton, Whyte Avenue, the Queen Elizabeth Pool, and other areas of the city.

The community is represented by the Strathcona Community League, established in 1918, which maintains a community hall, outdoor rink and tennis courts located at 101 Street and 87 Avenue.[9][10]

Almost half of the residences (44%) are apartments in low-rise buildings with fewer than five stories. A small number of these apartments are owner-occupied condominiums, however most are rented. Another one in four residences (25%) are apartments in high-rise buildings with five or more stories. Roughly one in three high-rise apartments are owner-occupied condominiums with the remaining two in three being rented. Almost one in four (24%) are single-family dwellings. The remaining 7% of residences are a mixture of duplexes,[13] row houses, rooming houses and other types of residence. Overall, three out of every four residences (71%) are rented.[14]Strathcona was the heart of the City of Strathcona and still is today (although a part of Edmonton) in many cases. According to the 2001 federal census, 15% of residences were built before 1946. Over half the residences (52.6%) were built during the 1960s and 1970s.[12] This is mainly due to a large amount of construction of low-rise apartments near or on Whyte Avenue and 99 St, and high-rise apartments around Saskatchewan Drive in the 1960s, 70s, and 1980s. Despite that, the area, especially around Mill Creek or just off 99 St is still home to a lot of old genuine character homes. Although the number is dwindling due to new infill housing.