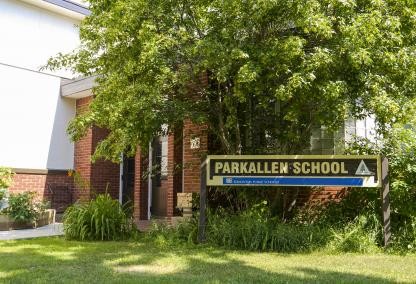 Parkallen is a residential neighbourhood in south Edmonton, Alberta, Canada located just to the east of the University of Alberta farm and the Neil Crawford Centre. Most of the neighbourhood development occurred after the end of World War II with eight out of ten residences constructed by 1960 according to the 2005 municipal census.[7]

The community is represented by the Parkallen Community League, established in 1920, which maintains a community hall and outdoor rink located at 111 Street and 65 Avenue.[8][9]

Most of the residences in the neighbourhood are single-family dwellings (81%). A further 15% are apartments in low rise buildings with fewer than five stories. There are also a few duplexes[10] (3%) and row houses (1%). Approximately two out of three residences are owner occupied, with the remainder being rented. The average household size is 2.2 people, with close to eight out of every ten households having only one or two persons.[11]

The neighbourhood is bounded on the north by 71 Avenue, to the west by 113 Street, to the south by 61 Avenue, and on the east by 109 Street.

Commencing in 2008, residents were connected to the LRT system when the South Campus/Fort Edmonton Park station opened just west of the Neil Crawford Centre. In June 2009, the neighbourhood partook in an "eco-mobility" challenge to determine how well individuals could function without the automobile. Many residents succeeded in changing their travel modes as a result of the challenge.[14][15]