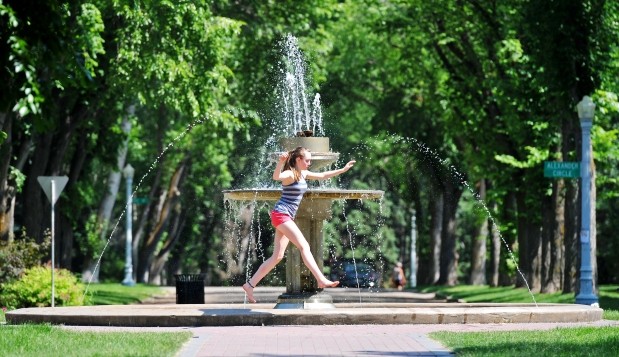 Glenora is a residential neighbourhood in the city of Edmonton, Alberta, Canada, overlooking the North Saskatchewan River valley.

The community is represented by the Glenora Community League, established in 1949, which maintains a community hall, tennis courts, basketball courts and outdoor rink located at 136 Street and 104 Avenue.[6][7]

The area that is now Glenora was originally part of a river lot farm homesteaded by Malcolm Groat, the namesake of Groat Road. The land changed hands several times before ending up in the possession of James Carruthers, a wealthy grain merchant from Montreal in 1905. At this time, the city ended at the ravine where Groat Road is now. Carruthers wanted to develop the area as a residential neighbourhood but transportation for commuters was clearly a problem. In 1909 he reached an agreement with the City of Edmonton to build a bridge across the ravine in exchange for the City guaranteeing to extend streetcar service to the area. The City wanted a 40-foot-wide (12 m) bridge, but eventually settled for a 20-foot bridge and a donation of land. The Carruthers bridge, finished in 1910 now carries 102 Avenue across the ravine, and marked the beginning of the development of the area.[8]The bridge made possible the construction of the new official mansion for the lieutenant--governors of Alberta, Government House which began which was completed in 1913. The 1913 Edmonton real estate crash slowed development substantially, but the local elite wanted to live close to the governor's mansion, and near the view of the river valley and with good connections to the streetcar system. As is typical all across the mid-latitudes of the northern hemisphere, in Alberta the winds are more often west-to-east than vice versa, and the "West End" (which included Glenora) had much better air quality than the east, which partially explains why Glenora is a "posh" neighbourhood[citation needed] while Boyle Street, a streetcar suburb of the same vintage to the east of Downtown Edmonton, is low income, much like the contrast between the West and East Ends of London, England.[citation needed]

An example of the upmarket houses in the area is The Graenon in St. George’s Crescent, a 3,152-square-foot (292.8 m2) mansion built in 1914 and commissioned by a former chief justice, George Bligh O’Connor, and his wife Margaret – a journalist and one time theatre critic for the Edmonton Bulletin. In 1966 it was inherited by their daughter Peggy O'Connor Farnell, a former British intelligence service employee during the Second World War, and her family who then lived in it until 1999. In the meantime Farnell helped to write a history of the Glenora neighbourhood that was published in 1984 and republished in 1999.[9]

Located right at the eastern end of the neighbourhood, overlooking Groat Road and the river valley, are the Royal Alberta Museum and Alberta Government House.

Alberta Government House was the home to the first six lieutenant governors of Alberta. Today it is used for government conferences, receptions and dinners. An appreciation of the historical significance of Government House is fostered by the Government House Foundation, consisting of 12 volunteers appointed by the Lieutenant Governor in Council.

Glenora is an older neighbourhood, with almost nine out of ten homes being built by 1970. Four out of every five homes is owner occupied. The average number of people per household is 2.4, with roughly two out of every three households having one or two people. Three out of four residences are single-family dwellings with one out of five homes being apartments located in a high-rise building. Almost all the remaining homes are apartments in low-rise buildings.

Glenora is a neighbourhood with an average per household income that is higher than the per capita income for the city of Edmonton as a whole. Approximately one in three Glenora households have an income over $100,000 per year.