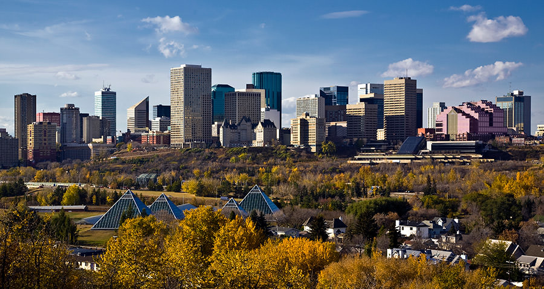 Downtown Edmonton is the central business district of Edmonton, Alberta. Located at the geographical centre of the city, the downtown area is bounded by 109 Street to the west, 105 Avenue to the north, 97 Street to the east, 97 Avenue and Rossdale Road to the south, and the North Saskatchewan River to the southeast.

The arts district is in the eastern part of the core with many award winning institutions like the Francis Winspear Centre for Music (home of the Edmonton Symphony Orchestra) and the Citadel Theatre. Edmonton City Hall is also located here with all these buildings facing onto Sir Winston Churchill Square. It is also the site of the new Art Gallery of Alberta, which opened in early 2010, and the Stanley A. Milner Library, Edmonton Public Library's main branch.

Churchill Square (Officially "Sir Winston Churchill Square") is the main downtown square in Edmonton, and is the heart of the Arts District. The square plays host to a large majority of festivals and events in Greater Edmonton. It is bordered on the north by 102A Avenue, on the west by 100 Street, on the south by 102 Avenue (Harbin Road) and on the east by Rue Hull (99) Street. Recently, the portion of 102A Avenue that cut Churchill Square off from Edmonton's City Hall has been closed off to vehicular traffic as a way to better connect Churchill Square with the fountains and some festivities on the plaza at City Hall.[7]

Government Centre is an informal district located at the southwest corner of the downtown core and is the home of the Alberta provincial government. The most notable feature of this part of downtown is the Alberta Legislature Building and its surrounding parks, fountains, and gardens.

An underground pedway system connects the Legislature to several of the surrounding buildings, including the historic Bowker Building and the Frederick W. Haultain Building.

Transit service is provided by the Government Centre Transit Centre located near the Federal Building and by Grandin LRT Station located just to the west.

Jasper Avenue is the city's "main street". It starts at 77 Street in the east, running south west along the south edge of Boyle Street until it reaches the downtown core. It then runs due west through downtown and the neighbourhood of Oliver until it reaches 125 Street. Jasper Avenue is a major public transit route as several of Edmonton's busiest bus routes travel along it. The LRT travels underneath Jasper Avenue between 99 and 110 Streets.

Jasper Avenue has no street number but sits where 101 Avenue would otherwise be. Jasper Avenue is home to many of Edmonton's oldest heritage buildings (for example the Hotel Macdonald) and some of Edmonton's tallest office towers, including Canadian Western Bank Place and Scotia Place; however, the presence of the former limits that of the latter, and many tall buildings are found just off Jasper where land is easier to obtain. Together with help from nearby streets like 100 Avenue, 104 Street, 101 Street, and 102 Avenue, the Jasper West area (west of 97 Street) is one of the major retail, living, commercial, and entertainment districts of the city.

Rice Howard Way's southern edge (100A Street at Jasper Avenue) has an entrance to the Central LRT Station.

A warehouse in the downtown core surrounded by high-rises

The Warehouse District is located between Jasper Avenue and 104 Avenue and between 102 Street and 109 Street. During the first decade of the 20th century, the Hudson's Bay Company began selling its land holdings in this area, and businesses were quick to move in. Between 1909 and 1914, no fewer than two dozen warehouses were constructed.[10]

In the later part of the century, warehouses closed and the buildings were redeveloped into commercial enterprises. In the late 1990s lofts were created in these former warehouses. In recent years, the area has seen a revival, with new lofts and condos being constructed or proposed, along with many designer shops.[11] The area also included Canada's first urban format Sobey's Fresh Market, flanking the curved Birks building as the entrance to 104 Street at Jasper Avenue, serving the residential population until its closure in 2014.[12]

104 Street (in between Jasper Avenue and 104 Avenue) is the main street in the Warehouse District and features shops, restaurants, cafes and a variety of services. On Saturdays during the warmer months (May–October), the street hosts Edmonton's original farmer's market, the City Market. The area is also known for lofts in old warehouses. The street is very dense, and has seen new projects completed in 2009 and 2010 (Icon I and II) with the construction of the Fox Towers condo complex at the northwest corner of 104 Street and 102 Avenue underway.[11][13]

Phase One started after the Ice District announcement 2014–2016. It has A new Office tower, and attractions along with Rogers Place.[20] Edmonton Tower, Winter Garden, and Grand Villa Casino Edmonton, are expected to open in 2016.[20] The MacEwan LRT Stationwas opened in September 2015.[20][20][21] The next Phase X will is from 2017–2020.[22] This includes Stantec Tower,[22][23] and the JW Marriott Edmonton Ice District & Residences expected to open in 2018.[22][24] Other projects include; A public plaza, future residences, and retail attractions, such as a Rexall pharmacy, Cineplex UltraAVX & VIP Cinemas, and grocery shopping centres. Opening throughout the 2017–2020 phase.[22]