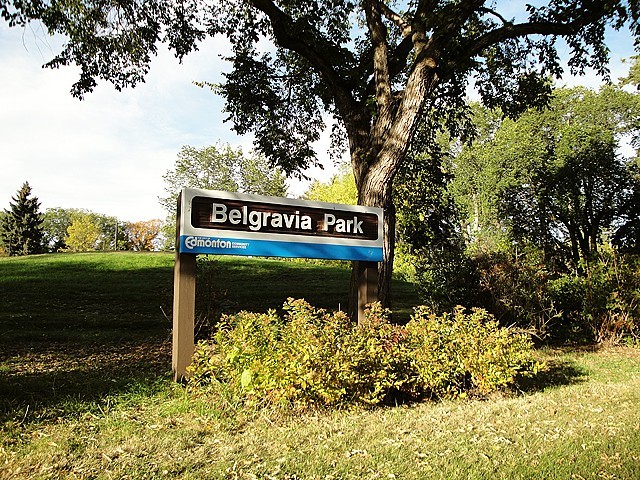 Belgravia is a residential neighbourhood located in the City of Edmonton, Alberta, Canada. It is located southwest of the University of Alberta main campus. Named after the Belgraviaarea of 19th-century London, the neighbourhood was once the southern terminus of the Edmonton Radial Railway. The McKernan/Belgravia LRT Station is located adjacent to the neighbourhood at the northwest corner of 114 Street and 76 Avenue in neighbouring McKernan.

To the west, Belgravia overlooks the North Saskatchewan River valley. The southern boundary is Belgravia Road, and the southwest portion of the neighbourhood overlooks Fox Drive. The north boundary between Saskatchewan Drive and 118 Street is University Avenue. From 118 Street, the neighbourhood boundary zigzags in a southeast direction from the intersection of University Avenue and 115A Street to the intersection of 114 Street and 76 Avenue. The eastern boundary between 76 Avenue and Belgravia Road is 114 Street.

The community is represented by the Belgravia Community League, established in 1954, which maintains a community hall and outdoor rink located at 115 Street and 73 Avenue.[8][9]

Three out of four residences in Belgravia are owner-occupied, with roughly four out of five residences being built prior to 1961. The majority of residences (72%) are single-family dwellings. The average household size is 2.4 people, with two out of three households having one or two people.

Belgravia is one of two neighbourhoods served by the McKernan/Belgravia LRT Station. The station was officially opened on April 25, 2009, with regular service commencing on April 26, 2009.